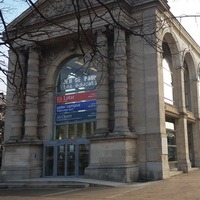 Rose Valland was the perfect spy. Her innocence was the best camouflage. When the Germans occupied Paris and the Einsatzstab Reichsleiter Rosenberg (ERR) moved into his bag-shop in the building of Jeu de Paume, she was already there. The art historian had previously worked for French museums and was familiar with the public and private collections in Paris and the surrounding area.

Soon Rosenberg’s agents began to loot the famous art collections of the Jewish families Rosenberg, Schloss, David-Weill, and Rothschild. Ownerless property in their eyes, for their owners had mostly fled – of necessity. The most valuable of these collections should at one time adorn Hitler’s leading museum in Linz, but Goering and other members of the NS-elite also made sure they got a piece of the art cake.

When the artifacts robbed by the ERR reached their temporary storage, Rose Valland could meet „old acquaintances“ again. Her task was to inventarize these works of art, possibly to record damages and to prepare inventory lists. The National Socialist artists worked with the usual diligence: on the inventory cards the name of the owner was usually entered, as it was also a quality feature when the works origined from collection like of the renowned art dealer Paul Rosenberg.

Rose Valland inventorized works of art in German possession, which she knew as a French cultural heritage. She did her work inconspicuously. Externally rather unimpressive, and a woman who understood only French – who would have guessed what actually happened. Nobody knew that Rose Valland spoke fluent German. She could well understand everything around her. But as no one knew, no caution was made to lower the voice when she came near. Thus she could understand every conversation and understand what the National Socialists had in mind with the French cultural treasures.

At night she secretly made copies of the inventories and passed them on to the French resistance movement. Her knowledge was later to benefit the monument Man James Rorimer, as she also knew where the Germans brought the art treasures at the end of the war. And after the war, it was Rose Valland, who came to Germany as representative of the French museums and reclaimed the French works. Her name is also found among most of the restitution applications of the French private collectors since she also acted as the representative of the Commission de Récupération Artistique in France. Thus, after the end of the war, she also spent a great deal of energy on the return of the treasures taken from France.