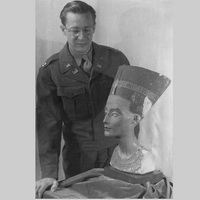 More than 70 years ago,  on a hot early summer of 1945 , a young soldier from Ohio came to Frankfurt – unaware that he  soon will play a significant role for the German art treasures, but already with the honorable aim of its protection: Walter Ings Farmer.

Born in 1911 in Ohio Farmer joined in 1942 the U.S. army after earning a master degree as an architect at Columbia University (New York) and Miami University (Ohio ). He received his military training at Ft. Thomas (Kentucky) and was able, thanks to his engineering background in the late fall of 1942 to build bridges. In 1943 he received his deployment order for overseas, first to England, where he arrived in Liverpool on November 9, 1943. As an architect, Farmer was there involved in the construction of military camps. In the spring of 1944, Farmer was injured in an accident with his jeep and had to take several months gypsum. During his incapacity he used the time with visits to the local bookstore and antique dealers. With the invasion of France in 1944, Farmer followed the troops to the mainland, where he was also responsible for the restoration of road systems of the destroyed cities. In the following months he learned of the work of the Monuments, Fine Arts & Archives section that interested him very much. His regiment was under the 12th Army, which had its headquarters in Frankfurt, so his work led him to the Supreme Headquarters Allied Expeditionary Force ( SHAEF ) where the MFA & A was attached. Farmer was originally intended to return to the States in June 1945 but at SHAEF office in Frankfurt he asked the British Colonel Geoffrey Webb and the American Lieutenant Charles Kuhn for another job for the MFA & A. In the interview with these two gentlemen they recognized that Farmer could make up for his lack of art historical training through his knowledge of military affairs.

What Farmer could not know: He came Messrs. Kuhn and Webb at the right time. In Frankfurt MFA & A office one was in fact busy trying to find a place to stay for the artworks that had been recovered in the salt mine Merkers and who had now for some weeks been in insufficient accommodation in the building of the Frankfurt Reichsbank. The choice for the so-called Central Collecting Point, which should involve not only the artworks of Merkers but also the outsourced art treasures of other nearby museums, fell on the building of the present-day State Museum Wiesbaden. The building, which had served as a machine bearing for the Air Force during the war, had been already putin operation by the Americans. . It had been largely spared from the bombing of the city, but still – the roof and almost all windows were damaged. Because of his professional background Farmer was predestined for the task of repairing.  He managed with great skill  to let raise and install windows, make repairs to the roof and installed a barbed wire fence  for the safety of the contents – in times of war-related shortages.

On June 19, 1945 Farmer was officially transferred to  the Monuments, Fine Arts & Archives-Commission for the Protection and Salvage of Artistic and Historic Monuments in War Areas at the U.S. State Department, whose member he remained until 1946. Since the establishment of the Wiesbaden CCPs in the summer of 1945 until March 1946 he served as its director.

Already in July 1945, the first works of art from the Cologne Wallraf -Richartz Museum  came in, and from August, the art works of Merkers arrived in Wiesbaden in 57 truck loads, works that before the war had been in the Gemäldegalerie in Berlin, in the Arts and Crafts Museum, the Egyptian department, the Graphic Collection, the Museum of Ethnology , etc.

Farmer had help from other art protection officers, as Kenneth Lindsay or Edith Standen, but also by a team of German employees who supported him with storing, inventoring and later with restitution. An important support  to him was his interpreter Renate Hobirk because he did not speak the German language. She had studied languages in Switzerland and was fluent in English and French. She came in early July 1945 from Berlin. At the Wiesbaden Museum she took over the management of the administration for Walter Farmer.

Farmer had brought the Central Collecting Point up and running. Since the summer of 1945 works of art from German collections arrived , all of which were outsourced to saltmines, castles and other repositories due to the war. He wrothe to his wife in the United States:

„We are building a new world and want to carry over from the old everything that is good. (…) Nothing can stop my work. I ‚m constantly on my feet , and yet it seems to me as if it was progressing at a snail’s pace. „

But then something happened Farmer could not presage and which was contrary to his conception of cultural heritage protection. Farmer received the order for the removal of 200 works of art in the United States of America – westward ho! Farmer is surprised – he had made every effort to ensure the storage of the artworks in Wiesbaden as secure as possible, with post-war restrictions. Should the US-Army aim to loot this artworks? Did the Americans wanted to bring German art as reparation to the U.S.? Were these 200 works of art just the beginning of a looting of a larger scale ?

Walter Farmer called the art protection officers stationed in Europe to come to Wiesbaden. Together they wrote a paper which has become known as the „Wiesbaden Manifesto“.

The Wiesbaden manifesto could unfortunately not prevent the removal of the 202 works of art in the United States. However, it was the initial spark for a huge wave of protest in the American public, which culminated in a petition to President Truman. Under public pressure, the U.S. government had to finally give in and send back the artworks to Germany. More sailings from the Central Collecting Points did not happen. An unprecedented action: American soldiers and civilians sat down not only for the preservation of works of art, but they worried also that it has to be preserved for the nation to which it belonged. For his services to the German heritage Walter Farmer was awarded the Grand Cross of Merit in 1995.

Returned to the United States Farmer married in 1947 in second marriage his former CCP employee Renate Hobirk. The couple has a daughter (Margaret Cornelia, born in 1949) and divorced in 1966. Farmer worked as a designer and owner from 1949 until his death in the company Greenwich House Interiors in Cincinnati, Ohio. He founded in the 1940s the Contemporary Art Museum in Houston, Texas, and was from 1950 to 1967 lecturer at the University of Cincinnati, Ohio. In 1978 Farmer founded the Miami University Art Museum in Oxford, Ohio. He died in 1997.

Walter was a friend of my parents. I met him occasionally as a child. I usually saw him at his store so I recall him as a pleasant, hunch backed, old man, with thick glasses surrounded by furniture, art, and furnishings. I wish I had known more about him before he passed as I would have loved to have heard stories directly from him. Thank you for sharing all this research and information.

Thanks for getting in touch! I really wished I would have met him in person too. Would have been indeed really interesting to talk with him about his experience in Wiesbaden!